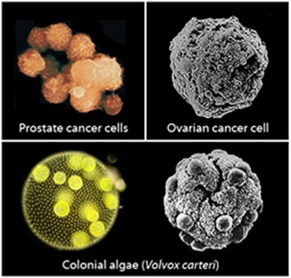 These two groups of scientists approach science from quite different perspectives. Oncologists, who focus on cancer from a biological perspective, look at how we can prevent and treat cancer’s development. Astrobiologists, on the other hand, spend their time pondering the question ‘are we alone?’ combining their training in physics with research into the origins of life on our planet.

Working with the United States’ National Institutes of Health (NIH), specialists from the two fields have come up with some important new understandings of what cancer is. The results of the cooperative effort are published in today’s issue of Physical Biology.

“Unlike bacteria and viruses, cancer has not developed the capacity to evolve into new forms. In fact, cancer is better understood as the reversion of cells to the way they behaved a little over one billion years ago, when humans were nothing more than loose-knit colonies of only partially differentiated cells.

“We think that the tumours that develop in cancer patients today take the same form as these simple cellular structures did more than a billion years ago,” he said.

Looking at life from the big picture point of view, outside the oncologists’ laboratories, reminds scientists that cancer does not invade the human body, but is in fact already built into our DNA.

“Our new model should give oncologists new hope,” said Dr Lineweaver. “It suggests that cancer is a limited and ultimately predictable adversary.

“Cancer is not going anywhere evolutionarily; it simply starts up in a new patient similar to  the way it started in the previous one.”

Cookies Policy
We use our own and third party cookies to improve your browsing experience. You can obtain more information in our Cookies Policy . Press the ACCEPT button to confirm that you have read and accepted the information. If you want to modify the cookies settings, click MODIFY YOUR SETTINGS. After accepting, we will not show you this message again.
Accept X Modify your Settings
Cookie Settings
© 2015 Farmacia La Nucia